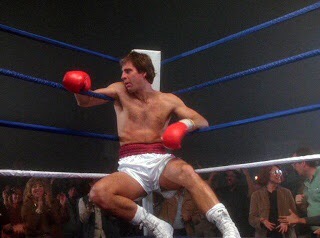 Sam Fain thinks “The Right Hand of God” is an over-plotted, too-complicated-for-its-own-good episode. Dennis thinks it is a perfectly enjoyable hour of television and worthy entry into the “Quantum Leap” canon. The two hosts spar it out.

Who is Sam this episode? Sam is Kid Cody, a heavyweight boxer on the take in 1974 Sacramento, California. Cody’s contract has been inherited by a convent of nuns (don’t ask; it’s complicated.) Sam is there to win a championship match so Sister Angela can build a chapel to help orphaned kids like herself – and maybe to help Cody and his girlfriend, Dixie, fund their long-dreamed-for donut shop.